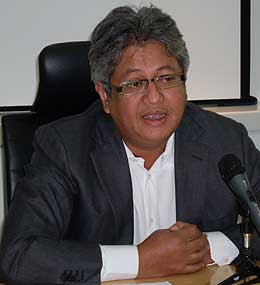 This former Cabinet Minister who was sacked by UMNO many months ago made another mile in his political adventure and I personally feel that PKR is the best sanctuary for his active politics.

I have known DZI for the past 37 years and his up-front thinking just cannot fit to the narrow-minded UMNO style of workings. I used to tell him years ago that if he wanted to be successful in UMNO he had to be turning and curving with the mentality of its leaders and members like me.

I reminded him that saying and doing right things is prohibited and going against the opinions of leaders will result in ungainly and miserly consequences.

DZI was not able to act according to the plot set by the Directors in UMNO politics and failed to amuse the big warlords in the party. He failed to realize that he did not need to do well for the country, what he needed was just to amuse the warlords.

All of us must accept the fact that UMNO is a property of a few warlords and the ordinary members are just their workers who are paid on piece rate basis.

Many people have realized that UMNO has ceased to be a Nationalist Party and fighting for Malay struggles is not their priority any further. It has become a business entity, serving the few warlords.

As he had so much apprehension to play and act with the script, DZI was unceremoniously sacked from the party weeks after he resigned from the Federal Cabinet.

BUT he accepted the sacking with no regret as he feels that the sacking is the consequent of trying to to do right things, even though he realizes that he was doing it at the displeasure of some big warlords in the party.

Now that he is there in the alternative party, Parti Keadilan Rakyat, I wish him the best of luck and as I have said earlier, my inner feelings tell me that PKR is the best premise for his political struggles.

No matter what people say I confer him high admiration for his clear political disposition and just ignore the uncultured voices especially those from UMNO and their blinded followers.

I hear and read many UMNO leaders and members giving disparaging and disapproving comments on his move to join PKR.

UMNO has divorced him and he has the right if he wants, to be flirtatious.

A man who divorces his wife has no right to decide on her future if she gets acquainted with another person.

UMNO in the meanwhile can continue on ostracizing good leaders until such point where the party will only be known to political historians.

how is PKR any different from UMNO?

UMNO has no right to call him anything that sounds bad.
But on hindsight DZI is the man with his own thinking.
Will he make himself good for PKR?
Can anyone tell me?

Bro, I don't think UMNO leaders understand how they would feel when they become an opposition in the legislature.
They are still with the same leaders. they wont change.

Zaid is write off as a politician. It is best for him to be just a lawyer and build his career as the most succesful Malay lawyer, not unless if he wants to be the "sergeant of the gurkhas" of Anwar's small platoon.But I think he will be a failed politician whereever he goes. Maybe he is acceptable among the Indians estate workers and some Indian lawyers but not among the Malay grassroot. Is he a good leader? No, I doubt so. He just cannot get the respect from the Malays. He is too elitist.

Bro, i dont doubt Zaid's capacity but I doubt his love for his race is zero.
If only he has a bit of respect for his race, he should be well rounded.
I hope he change his attitude towards his own race.
Aspan, just days ago you wrote that God create human being different from each other. So Zaid must admit nature decides everything.
I don't have malice against him bro.
I just want him to be a Malay, I mean a good Malay who has allegiance to his race.

Aspan,
UMNO deceived Zaid. AAB said he wanted Zaid to change the poor image of the judiciary. When Zaid tried to do some changes UMNO was afraid because they dont want clean judiciary because they cannot survive with clean judiciary. In the end AAB dared not defend Zaid because TDM is irritated because Zaid paid some compensation to the judges which he sacked.
In UMNO it is all, palat,palat and palat!
Just got sick of it en. Aspan.

Datuk Zaid is smart bro. I think he knows BN is going bust in PU13.
He is not a katak. He was dispelled from UMNO. TDM was once dispelled and he became PM.
PR should be given the chance at least for 1 term.

Ya! Warlords like Mahathir, Najib himself and Daim of course.

All good leaders are chucked out and they control UMNO and the government.

They want us to enslave ourselves to them.

All Malaysian are at fault for allowing them to treat us like a dirt.

Serve the Malaysian right! We deserve to be treated this way because we voted them in.

From Umnoputra to Noputra !! Mana ada prinsip. I don't have high regard with this kind of person. What is he trying to prove? To me, knowing his background he is just an impressionist. Dia seperti mengigit jari orang yang telah membuat dia kaya raya dan menjadi peguam yang berjaya. Itulah pandangan saya terhadap Zaid. I think it is a fair statement from me. No malice at all against him.
It is just unfortunate that he could not shine within UMNO rank and file. Why? Because he is too idealist and trying to impose his views in opposite direction most of the time without giving due consideration of other peoples sensitivities. There are so many ways to put things right but not not the way he present himself. Yes, no doubt he is an intellectual but that is not good enough if you want to lead a conservative Malay society who are very sensitive to a person's personal behaviour. He belongs to a Malay elite high society and as such the majority of the Malay working class do not feel comfortable with his attitude. That is why I think he failed to continue to get his parliamentary seat in Kelantan to represent UMNO.
Anyway best of luck to him. Hopefully, he could be effective as PKR member together with Anwar.

Everyone has a place where he is fit to. In this case Zaid is much better to be in PKR.
If PR is given the mandate by the people Zaid will be there in Putrajaya.
After all chances of PR to take over is fairly bright and I do hope Zaid will be successful.
Nobody can tell thew future of anybody.

Kudos to Zaid for a smart move and I'm absolutely sure he will follow thru with the reforms/ changes that we are seeking for the betterment of Malaysia after being screwed by UMNO/ BN.

Datuk Zaid,
Show your passion for the Malays and show your eagerness to see racial harmony.
Then you would be there at the helm.
I salute you Datuk and just ignore UMNO's undignified leaders.
They are bunch of corrupt club members.

how could he be a great leader if he is not able to be a good follower? lets talk about the basic before engaging further.

sorry to say, kurang berminat dengan pemimpin yang mengakui tokoh tapi haprak. what's a big relief when he is out of umno?

Our parliamentary system is DEAD. Make no mistake about it. Lately, you observe some of the wakil rakyat really behave literally like "monyet". They are really haprak and HP6!! Dah bodoh stupid. They don't deserve to be called Yang Berhormat but calling Yang Bercawat more likely to suit them !!
Hanya orang yuang "bercawat" sahaja yang berperangai bagaikan "monyet".

This "unity government" talk is all RUBBISH!. It is all political rhethoric. At the end of the day nothing will happen at all for sure.

As usual the Malay leaders are still talking about politics even when they know that the rakyat are struggling to make ends meet with the current uncertainty in the economic front.

Tolonglah !! We have to move forward and act fast to put our economy back in the right footing. We shouldn't be wasting our resources to continue arguing about politics.