Can MCA be the same again? 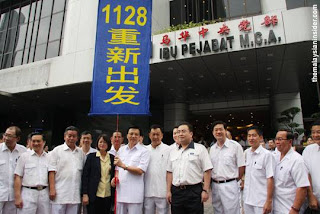 They want to elect new leadership once and for all as the last available choice in their effort to reinstate the sanity of the party and enjoy the regards from the Chinese Community which they have lost almost in total.

With this decision made by the delegates, it clearly reflects the real mood of the members and this atmosphere is not a good pointer for Ong Tee Kiat and he may be voted out in the election if there is anyone who is offering to replace him.

But if the President is to be challenged Liow Tiong Lai is the only person who
is seen as the logical person who is going to take on the mantle.

So far there are already 13 CWC members who follow the mood of the delegates by offering to resign from the CWC and these 13 members are lobbying for the rest to follow suit and resign en-block to reflect that democracy in MCA is still there.

These 13 members are all from Liow’s bloc and they were carried high up by the mood of change if not from the ordinary members at least the delegates showed the intention to change very noticeably.

The 28th November decision is another vote of no confidence like to the leadership of Ong.

I have a number of friends from MCA who were delegates to the 28th November and all were in the mood to see a new President be chosen to give a little prospect of seeing the party to be revamped and to start anew in reclaiming the support of the Chinese which the party has lost for past few years.

It is very logical move as giving the members to decide who they want as their leader is the most authenticated mode of saving the party and consequentially none among their elected leaders in the lineup is to be blame of any misadventure in the later days.

BUT it isn’t that easy to make up to the resolution as Ong is not going to follow the decision made by the delegate.

Ong is now trying to barricade and circumvent the move by saying that it is unconstitutional not to hold the AGM schedule on the 5th of December. Liow’s faction want the AGM not to take place as to him getting prepared to hold fresh election within 60 days from that day should be the priority.

To Liow, the problem now is the leadership and it is always logical to address the issue first rather than playing the game by manipulating constitutional provisions.

The political game that the big names in MCA is very fluid and it all now depends on the real wants of the members.

The 27 other members of the CWC except for a few staunch supporters of Ong and Chua are now take wait and see stand and as time passes by there will be new turn of event to come.

As far as Liow’s team is concerned they confidently believe that the fresh election of office bearers would be tilting well to their side and the team is now seen as the next lineup that would rule and manage the party.

If that would be so, is Ong Tee Kiat going to just let the event sinks his political future at his tender age of 53?

Grouses are widespread within MCA alleging UMNO forcing the solution to the problems without real understanding what the goings in MCA is, and some are blaming Muhyiddin for worsening the issues.

Some who dear to me within MCA are saying that there should be a real new deal and package in our political system of the nation as every party and individuals are going without direction.

The new deal should be based on mutual benefits of all races and this has to be done swiftly. Keeping all issues faced by parties within BN and Opposition unchecked, would only help to put this nation in total disarray and discomfort.

Malaysia is one of the members of International Community and the community is watchful on us. The apprehensions of Petronas to fulfill its obligation to honor the agreement of Royalty to oil producing states add up to the vulnerability of international perception to the nation.

The international community thinks that if the simple and concise agreements which so handy to be comprehend were made complicated and if the Government insists of not paying the Royalty it is not impossible for the agreement to be rescinded.

But UMNO is UMNO; they are the ones who can commit illegal move, but not for others.

But the time for UMNO to work out her normal propose and support is all over. UMNO and its leaders must recognize that the thinkers and the brains are outside the party or at least outside the party leadership lineup.

The years of ruling with iron fist are long over. Now leaders can’t lie or deceive the people any longer.

The voting public is alert set and any attempt to mislead or misinform them would face grave political consequence.

In MCA the ordinary members are looking at DAP or any other party which they consider relatively better for their comfort.

MCA must learn what has happen to MIC; Samy Vellu is soon to become an orphanage Indian leader.

BUT I still think that MCA members are far more responsible to their party than UMNO members to their struggles.

The sooner MCA calls for their AGM to elect leaders they prefer the better for the party and BN as a whole.

GOD blesses you MCA. We hope you won’t face what GERAKAN is facing.

He he, I thought Najib says that MCA is back to normal?

Your mentality is the same as the pr. Don't blame on UMNO when your house is in a mess. These 3 mca leaders all want to be a king..

In today's paper Najib says he would unviel the peace plan for MCA.

We just see, he has failed in a lot of things he plans but I think he wud succeed with MCA peace plan.

Let's pray of his success.

No to worry about the Chinese. MCA leaders when they are in power they wud help all Chinese irrespected of political affiliation.
BUT you people in UMNO when in power help only yr camp members.
Those in PAS or Malays in opposition wud be shun off all opportunities.
And within UMNO they will ask whose man you are.
If you are the person who supports their intra-party enemies you will be side lined without mercy.
I don't hear any MCA Minister asking his fellow Chinese whether they support MCA or DAP.
So do not worry abou MCA, just worry about yr fucking party.

Azlan, I agree with your opinion but i do hope you try not to use a foul language.
Let us all be civil and reflects a good disposition which would be nice in our interaction.
Thx and sorry

I think it is timely for you to give full support to your party and stop criticising your own party. Sdra meludah kelangit akhirnya jatuh ke muka saudara juga. Please do justice to UMNO and its leaders who are trying their very best to revamp the party. Fikir fikirkanlah !!

I just wonder sometimes whether your naiwaitu (conscience) is really to help UMNO or to destroy UMNO by the way you criticise your own party.

It seems to me you have an axe to grind at somebody that you really hate or would like to exterminate his political career.