Zaid Ibrahim - On leave or leaving?

Datuk Zaid Ibrahim announced that he would go for six-month sabbatical leave and would lie off from active politics during that period.

Zaid denies that there are internal evils in the party but how can he deny it as it is clear and latent that problems in PKR is already at a critical level. This is crudely political denial.

This announcement was met by speculations by the public and members from other parties that he is leaving the party out of his annoyance and aggravation with the attitude of the owners of PKR, Anwar Ibrahim and Azmin Ali. 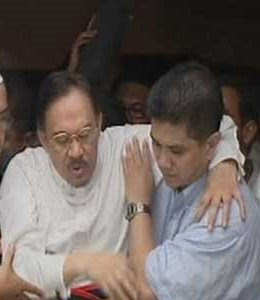 Azmin is seen to be the real culprit in the party as he has managed to encapsulate Anwar’s soul to his.

Every view and advice that comes from Azmin would be accepted without exertion and Azmin barricades anybody from being close to Anwar to avoid anybody else being loved by Anwar.

Zaid seems to be the latest victim of Azmin and he is the immediate cause that made Zaid decided what he has decided.

For past months Zaid had already been feeling uncomfortable with Anwar Ibrahim as he has been playing too excessive intra politics within PKR…and this is typical of Anwar.

Jeffry Kitingan’s issue which Azmin is involved put him in misery and this is how he decide ultimately; take leave and detach himself with Anwar and the co-owner of the party, Azmin.

Let me not write on the many reasons why Zaid decided to take leave, but focused on the immediate cause that made him decided to lay off from active politics in PKR.

Zaid was invited by Jeffry Kitingan, the then chief of Sabah PKR to attend Hari Raya gathering on the 17th of October (today) in Kota Kinabalu. Jeffry had made arrangement for Zaid to speak to 2,000 guests and Zaid accepted the invitation instantaneously.

He was also arranged to attend another gathering on the 18th in Kuching arranged and set up by Sarawak PKR leaders.

But these invitation was taken as a threat by Azmin who now heads Sabah PKR and he puts wedges between Zaid and Anwar.

On the night of 13th October night at PKR headquarters,Anwar told Zaid not to attend the gathering but Zaid did not answer him and went home with much sorrow.

Zaid at that point of time was still deciding to go as he has committed to the invitation 2 months ago.

BUT the real agitation that Zaid couldn’t take was when he received text messages from Anwar on the 15th early morning at 2.30 am instructing Zaid not to go to Sabah.

Anwar told him that he (Anwar) would instruct Jeffry to cancel the gathering if Zaid insists on going to the party.

Zaid felt that Anwar is not a leader anymore and he despises the former Deputy PM for treating him like his tiny cousin brother.

In true actuality Azmin does not just gives havoc to Sabah PKR and Kitingan; he did the same in Selangor and he incessantly undermines Tan Sri Khalid Ibrahim.

Anwar is not appreciating the efforts of his followers who have been concealing his personal leadership handicap.

Anwar is still having the same mentality that UMNO leaders have. Proving good performance would incite and inflame hatred among peers and colleagues.

UMNO is now going to the drain because of the same reason and in the end the ordinary members and public suffer.

In UMNO all good leaders are outside the line up. In the end the country is managed by half-baked leaders who know only tips of everything or know nothing at all.

I have conclusively said many times through this blog that if a leader especially the top ones have to grave personal problems would cause the nation meandering to disaster.

These kinds of leaders will never ever be able to decide appropriately and the rakyat will be the final recipient of the negative corollary.

Like what we see in the last few days we stuffed with leaders with hollow rhetoric and high charged speeches in order to cover up the massively defective leadership eminence.

That was actual scene in the UMNO General Assembly especially on the final day.

The President's speech reminds many delegates of Anwar Ibrahim. It was like attending an inter-school debate while we were in high school.

I asked one of my friends who were a delegate from Johor how was the speech of the President he reluctantly said, “I don’t understand what it was. I only heard clappings and laughter. But the President looked so satisfied with the clappings and to him that was his ultimate success”.

So back to Zaid Ibrahim’s harms with Anwar and Azmin issue it reflects that both UMNO and the alternative party have common problem; i.e hollow leadership.

I strongly suggest that the people must go for a new glance for the nation.

Many on the ground want to see that this nation should start anew and repackage a total revamp of our political system.

Anything less would only injure our generation with never ending tribulations both in politic and government. They would in the end be like dogs licking their own wounds.

Let us find a genuine leadership who has the heart only for the people. I am certain that we can find one.

Typical of you Aspan;

You will write about Zaid initially , totally a PKR internal issue. Later on you will sidetracked to bash UMNO or your bashing favorite, TDM.

Stop whining about getting a genuine leader and stop dreaming of TR come-back. The leader is already here; Najib and whatever short-comings he may have, he is many times better than your sleepy Pak Lah.The Malays need to support him and give him the chance.

surely you know about anwar and shamsidar

if anwar do not listen to azmin,he will be exposed and ummi hafilda shall be proven right

The leaders corncerned is not happy but their blind supporters will feel worst.

you are just right. UMNO cannot change if there is no change in leadership.

The same group of leaders made the party become stale, who is now talking about perubahan.

Which party will he join after this sir?

Thanks for the link sir

Yes, you tried your best to be magnanamous to give them the benefit of the doubts but you are now disappointed & dishartened by the charades on both sides of the Political divide.

Everyone of them Political Leaders on both sides of the Political divide are “Squeezing” each other by the “Orbs/Jugulars”....

Failing which....let us all sit back & watch both BN & PR "Self-Destruct" with their own "Trojan-Horses" from within.

As I had mentioned many times before.....

Someone only WITH the sincerest interest to right a wrong, being guided by the Almighty...

Having the unseens praying for him as they too are concerned of this state of affair of this blessed nation....

Maybe the time has not been so near yet....for such ‘event’ to happen.”

Yes, many Chosen Situational Leaders will evolve in the process from amongst the Rayaat....

A True & Wise, Humble but Firm Leader for Malaysia will arise from the ashes of BN & PR....

Followed by the emergence of A new United MALAYSIAN National Party for ALL MALAYSIANS....Insha Allah!

Cheers & may God Almighty Bless you & your family.

Your blog keeps getting better and better! Your older articles are not as good as newer ones you have a lot more creativity and originality now keep it up!

hello there, sweet content
what is the way to get blog posts which smash in your visitors:
http://tinyurl.com/ylj3rxw