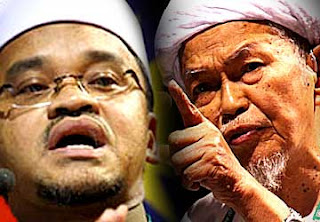 The currently widespread discussion is about Unity Government, the proposal that PAS and UMNO should work together for the sake of unity especially among the Malays.

Everybody is yet to understand how the workings are going to be as it is still at an embryonic level, and the heat is building up especially within PAS leadership.

Nik Aziz is adamant and insists everyone to listen to his advice that the proposal mooted by Haji Hadi is not going to work and he went to the extent of warning the Deputy President, Nasharuddin Mat Isa to join UMNO if he is still milling on the issue.

The opposition leader Anwar Ibrahim in disapproving tone responded that the issue is not just as simple as Hadi is saying it and insisted that all the Pakatan Rakyat’s coalition should decide whether talk should go on.

PAS secretary General, Mustafa Ali says that PAS is not going alone to talk to UMNO and he assures that PR coalition partners will be brought together to address the issue of PAS-UMNO unity talk.

The issue becomes hotly debated after Najib responded with a statement that PAS is sincere in proposing the unity talk and that statement is very unUMNO-like as UMNO has taken PAS as its punching bag by the weakening party.

To many PAS members who are in engagement with me, think that PAS is already a consequential party and they believe they can go on their own with undivided cooperation from its coalition partners in Pakatan Rakyat.

They feel that the warm response from UMNO is because UMNO is fast dilapidating in the ground support and by working together with the party would result in the voting public to be apprehensive to continue supporting PAS.

Some told me that by working with UMNO means PAS is now accepting the ills and the misdeeds that UMNO have committed all the while, the very reason why the rakyat went all out to admonish and put off the ruling party from power.

Many PAS members and the public have already a mind-set that the Malay unity can only happen and achievable outside UMNO as UMNO is in the midst of speedy corrosion and erosion of credibility especially within the top exclusive line up of the party.

To them UMNO is already synonymous to corruption, misusing of power, clannish and cronyism as well.

The once highly regarded UMNO has changed and holds on to the image of debauched, depraved and infidels. UMNO currently is just clinging in to the executive power that they have which can only last by the next General Elections or even earlier.

UMNO realizes this negative public perceptions and any proposal by some PAS leaders to work together would be a life savior for them (UMNO).

The public are having the opinion that UMNO can only stay alive with drastic changes in their leadership right now, as the current line up that the delegates empowered is of rotting varieties.

In actuality UMNO is denied the public support by its own lowly regarded leadership presently who are linked to ill metaphors of negative all round.

None of the top leadership in UMNO can stand upright and say, "I am clean, I am free of crimes and I shall sue you if you link me to any kind of murderous activity or anything like that."

There are terrific leaders in UMNO but they are sidelined by the distorted system in UMNO. The election processes of leadership are marred by money politics and misuse of power over the cheap and lumbering delegates of just over 2000 in all.

No one among top leadership is valiant enough to come up and say, "The government will declassify all agreements with Highway concessionaires for the public scrutiny or the government will set up Royal Commission on the controversial purchase and procurements of the Ministry of Defense" or anything of sort.

So to many PAS members and the thinking public, they are hopeful that the dissimilarities in the opinion among PAS leaders should be immediately resolved as PAS is going to be the real Malay alternative party in the coming General Election.

To those who have no sympathy for UMNO any more would surely set to give the support to PAS and other components of Pakatan Rakyat and any wrong move by PAS may make them abstain from voting any party.

In short if PAS works with UMNO of current line up, the party (PAS) is just giving another long lease for the corrupt and the misbehave leaders in UMNO to enjoy ripping and milking the nation dry.

"If PAS takes the line of compromise with UMNO, it means compromising with the corrupt leaders who take our country to the ditch. There are no more viable leaders in UMNO unless the party comes up with alternative leader with good track records and respected by the people," said a high corporate friend and a PAS strong supporter.

"We were hopeful that Tengku Razaleigh (TR) be propped up by UMNO, but UMNO is UMNO; they don’t want good leaders and continue on electing deceitful leaders to shred this country into pieces," he continued.

To me the compromise of the 2 parties if successful, can be quite meaningful as the 2 parties are Malay parties. If they can work well it is the cooperation between 2 parties representing the Malays which form at least 60 percent of the population.

If the 60 percent population is united than we can move on to work for a compromise with the rest of the 40 percent, which constitute of the non-Malays.

BUT then again, if compromise is reached, are we still going to see the same current leaders to lead us? If it is still the current person or persons taking lead of ruling us, is there any worth of compromising because it is as good as no change.

If there is no change, there is no new direction, and UMNO/BN is swiftly going to predictable arrival point; that is political insolvency.

UMNO cannot be trusted bro. When PAS won the state assembly in 1999 the Federal UMNO government took away wang ehsan that was supposed to be given to any reigning government of Trengganu.
That was the agreement. UMNO dont even want to read the agreement.
Apabila nak mati baru kata PAS ikhlas.

Lets be practical and face reality. You still want Tengku Razaleigh to be the Prime Minister and head the unity government. It is just impossible. Tengku Razaleigh is already in the history book of UMNO like Mahathir and Musa Hitam. There are a lot of new breed leaders from UMNO and PAS who are waiting for the opportunity to be Prime Minister including Anwar.Saya rasa Tengku Razaleigh dah ketinggalan sampan panjang. Ramai dah masuk dalam sampan dengan "pengayoh sakti" mereka.

Nak pendekkan cerita, it is a matter either both parties have the political will to set aside their strengths and weaknesses and their political differences for the sake of Malay unity. If they are not prepared to compromise then sampai pagi ayam berkokok pun hasilnya tak kemana. It is waste of time and unproductive. Syok sendiri sahaja!!

UMNO is desperate. Whatever PAS demand would likely be accepted by UMNO. I wonder what UMNO can do to be relevant since that party is technically is already at a weaker end.

Thanks for your soothing advice. I agree totally that in essence all these happenings are the "af'aal" of Allah.

So bro, I am not that nostalgic over things like this, but I am getting impatient to be at where we were.

Anyway, I can see your sincerity and I appreciate that immensely.