ISA, the Candidate at last

Tan Sri Isa is the BN candidate for Bagan Pinang at last. The announcement was made at 5.15 pm today in Port Dickson and it was received in applause of the eager UMNO members and the exuberant supporters of this former MB for the State.

Pakatan Rakyat on the other hand is also putting up huge effort to come up with good candidate and I can see that the alternative front is much more prepared compared to what they did in the last General Election (GE).

Pakatan Rakyat is formidable as they are better organized and the alternative party is well on the ground with unwavering supporters expands by leaps and bounds for the past months.

I was in Port Dickson last night and visibly witnessed the intensity of the election is already building up as until 1am in the morning the coastal road was still busy and bustling with human movements.

Kopitiam, mamak restaurants, fruit stalls and other food outlets are all in full gear businesses.

I was at one of the food outlets with some strong UMNO supporters who were waiting for early clue of who is going to be their candidate that is to be announced today by Tan Sri Muhyiddin. 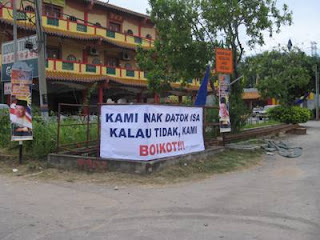 I responded by saying, “Tak apalah, you just do the needful to ensure that we are giving good battle to retain the seat.”

As long as the conspiring group is firmly identified it should be okay. Your fight is with the Pakatan Rakyat which seems to be fielding a good candidate and we are not fighting with our own party men”.

In actuality, this is the real atmosphere of the situation in Teluk Kemang. Someone and somebody is not at all feeling secured if TS Isa is back to active politics at the State level and this group is relatively of no consequence to the by-election.

These small groups of unhappy individuals are saying, “Kito mandikan Isa kalau dio botanding” and this is the reflection of deep feeling of insecurity of somebody in Seremban.

In my heart I said to myself, “siapa yang mandikan siapa?”

This kind of intra-political play is the actual reason for the past experiences of losses that BN was facing in all the by-elections.

To me the influence of the Pakatan Rakyat is ever expanding and with Isa’s candidature the chance of defending this bastion and fortress of UMNO can be seen as a close probable.

If UMNO leadership were to listen to the conspiring group in Seremban by fielding another name as the candidate the result would be predictable; that is a LOSS.

On the other hand, with Isa’s candidature UMNO Teluk Kemang should avoid celebration. Politics of today is erratic and unpredictable.

To TS Isa I wish him the very best of luck and welcome back to the mainstream of NS politics.

Do not get perturbed by a fractious misgiving within UMNO.

bro aspan,
i agreewth TDM that UMNO is taken hostage by corruption the the best candidate fo an election is still a man with corrupt records.

you should consider agreeing wth TDM on this issue bro.