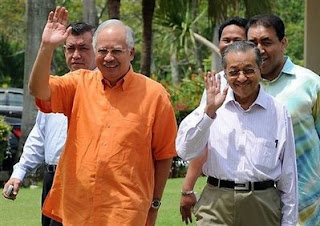 Managing a beautiful nation like ours is not as easy as ABC, and DS Najib is certainly the man the nation and the world are focusing on with full watchfulness.

A leader cannot be called a leader by just being able to provide scholarships to the poor students or just by supplying electricity and water supply to the remote areas, the issue which is popular to the campaigners in any election.

We are still not considered to be leaders just by building infrastructures, first class motorways, high and impressive skyscrapers, high class Mariners, International Tournament standard Golf Courses, having lists of International Convention Centers and witnessing rows and lines of Rolls Royce and Daimlers running through our highways and city centers.

History has proven to us that many great governments and nations went into oblivion, like the Ottoman Empire and numerous other kingdoms and nations do not even inherit their remnants of their existence and we only find them in history books.

These are the points that many sons of the soil are worried as the conduct of leaders of today will determine the future fate of the nation and more so about our race.

Don’t take things for granted, as many races in history, has lost their existence because of poor leadership and spiky attitude and values of live.

The Red Indians is disposed as an ugly creature in cowboy films; exceedingly unintelligent, dim, obtuse and brainless being. They were the legitimate indigenous race of North America but because of their loose character of their leaders and the people made them look what they are today.

Being Malay I am personally worried, that my race will be in oblivion in this world like the Red Indians and the indigenous in Australia.

The race has come to a point where nobody recognizes and being looked as a parasite to the modern race and society of migrant in origin.

In United States the migrant are truly in power to the extent of controlling both the hemispheres politically and more so economically.

The trend seem so obviously looming and intimidating in our country and the indigenous Malay and Bumiputras, especially the leaders are becoming to be items of trade by businessmen and big taukehs and profiteeriees.

Once political leaders are in deep love with big businessmen nothing can go right anymore and we only have to wait for one thing, i.e. a total caving-in of our political and governing system.

From that very moment no leader big or small can ever make proper and fitting decision for the country anymore.

To my mind, UMNO which was formed to be a nationalist party has gone way ward as an exclusive party for the few so-called astute beneficiaries with massive number of membership. The millions of ordinary members are made-believed that they are up there for Malay struggles.

Whoever takes the mantle, he would first come out with imposing and inspiring slogans some which we can still remember; ‘Bersih, Cekap dan Amanah’, ‘Don’t work for me, just work with me’ and the newly talked about ‘1Malaysia’ which DS Najib professes.

In the end as I have said once, there were no Bersih, no Cekap and no Amanah. For the other slogan, people just couldn’t work with him as he didn’t have sufficient work to do.

The ordinary members are slowly beginning to believe that they are deceived by their leaders and no one should blame them as they are just as human as their leaders with differences in thinking and perceptions.

The difficulties DS Najib is going to face are not at all small with 1Malaysia slogan that he designed.

BN has not been careful enough to maintain the affable and splendid inter-racial interaction created by the New Economic Policy (NEP) as the leaders since 2 decades ago were more focused on physical development less other important ingredients of nation building with 1 ultimate that is National Unity.

The past 2 administrations have totally ignored this important issue that currently in place. We only start discussing about the issue when everything is already decrypted, and left with thin insulation to maintain racial harmony.

Rukun Negara for instance is history as no one talks about it anywhere anymore, but one must remember that is the best ever result of years of soul searching by our fore fathers we never care to give regards to.

I still say that the dismantling of NEP prematurely was the sure cause of what is happening today and we can’t listen to the persons who ignored this issue to do the corrective exercise if there is one.

We truly hope DS Najib would manage the nation by consultation and reduce intra-party move within UMNO as that would derail the effort to arrive at the point which we used to rejoice immensely.

DS Najib’s effort for amicable solutions is highly expected and he has to work double the effort than his effort to be the Prime Minister.

I shall continue this article, maybe late on the weekend.

Leave Najib alone for the time being. Give him a breathing space to chart a new development strategy for the nation. I think Najib is in the right tract so far.
We need to talk less about politics and move forward to talk something that is really productive to ensure that the people benefit with the new change of guard.

The Malays have been talking too much about politics compared to the Chinese who are eager to see something changes for the better and fast. The Chinese are very practical people. They are more concerned about enhancing their quality of life. But the Malays are still talking about politics all day long practically everyday. That is the difference between the Malay culture and the Chinese.The Malays got to change their paradigm.

Tok Jantan, if Najib can fulfill, the aspiration of the nation, we will be more than happy to see.
Tapi mampu ke Najib ni? Saya ada resrvations terhadap beliau.
Any way lets hope for the best.

Encik Aspan, it is fine for you to write anything you feel fit to write.
It doesnt mean that you are disturbing DS Najib but instead he may find something which he may want to add on to his plans of charting the nation's fate in the future.
I see you are quite open and you are brave enough to express your opinion.

I just wanted to remind you what have you written concerning Najib.

" Mohd Najib can’t even handle his own race or at least one of his family members and one can envisage how he is going to manage other races other than to concede blindly all their demands and quests at the expense of his or our own struggles."

A change of heart, Aspan? and why?

He, He, He Anonymous,

Many quarters are believing what you believe, and of course includes me.

That is the very reason why I hope has does a good job while he is there.

You see Manonymous, I always believe that the seriousness of the very near future is beyond my imagination, which I bet is beyond Najib,s ability to manage.

So, its fair for anyone to see what he does first rather than to be conclusive in giving opinion on DS Najib.

Percayalah. Najib will deliver. He has the material to be a good Prime Minister. Trust him. Insya'allah. Knowing his background coming from a good family I don't think he will fail the rakyat. He is not suffering from cultural shock. I am sure he wants to keep his family's name to be highly respected. He doesn't need anything as far as material gain is concerned. Now is the time for him to show his capability as a true leader by extending his late father's vision to help the rakyat. You cannot compare him with the deeds that his father leave behind. The environment during his father's period was totally different. Now I believe Najib really wants his own development strategy to suit with the current scenario.Give him a chance to prove himself by giving him the fullest support rather than keeping on harping about something very negative that is very damaging to his credibility. What do we gain by continuing pulling him down?

Is that fair to keep on castigating him just because he is not the favourite choice of some people to have him as our Prime Minister?

Face reality and accept him as a democratically elected Prime Minister and move forward to expect something positive from him since he is now seating on the driver's seat.

Aspan,
can we just conclude our opinion on Ds Najib?
I think he is crashing even before taking off!
Do you agree with that?
I need an answer as I see he already struggling. He might concede to all demands of others to survive. shit scared man!!

Ikanbilis,
I have the answer to you question, based on my personal view.
But it would be in my next posting on this coming weekend.
It is not just you who is worried, but many more are mutually having that feeling.
Thanks.

I am not a politician at all. But being a 65 years old man I feel more comfortable to always think positive rather than look at the negative side of things.

Maybe I am biased because I had benefited a lot from the BN govt. policies which I had enjoyed especially to get all my children finished their higher learning education with the help of the govt. and also getting business loans from govt. agencies to get my small business going until today. Alhamdulilah syukur!

Hi Tok Jantan and ibrahimkoyan,
Both of you are terrific, having good polemic on politics and friendly too...not emotional and no fight...and also no mencarut and no abusive words like many commentators do.

We learn a lot from your polemic and understanding of issues.

You all are level headed guys and must continue exchanging views..you should remain civil all the way...class!! congrats!

Itu lah ONE MALAYSIA. It is as simple as ABC to understand!! Why make it an isue when there is NO issue at all. Don't you think it is rather stupid to have all kinds of negative imagination towards this simple slogan? Only those who are against the leadership of Najib would continue to question the rational of having this slogan. They just want to create a political issue out of NOTHING. What a pity !!

yindanyan, I am so sorry that I lost your comment this morning.
For some reason it just disappeared and I have been trying to retrief it till this moment.
I have read the comment, and I hope you send it again for me to print it.
Apology bro.

Encik Aspan, betul tak senikatanya itu? He he he!!

Tok Jantan,
Just permit me to give my view testimonially as a person whom I have been associating with for a long while.

Aspan as his name goes is a person who who is very lavish in giving out his opinion with loud thinking and that made him displaced and never he would rise.

He knows that but he enjoys being vocal and he has no qualm of not being given any position and I have never heard and saw him lobbying for position.

Whewn I asked him many times what his business is, his answer is standard: "I have no business to be in business" or "I dont know how to do business".

He doesn't criticize individual but he always criticizes on policy not personal.

His friends are abundant, and I enjoy being with him. He is poor to the standard of UMNO members.

He is tough inside.

Tok Jantan, just a bit that I know about him.